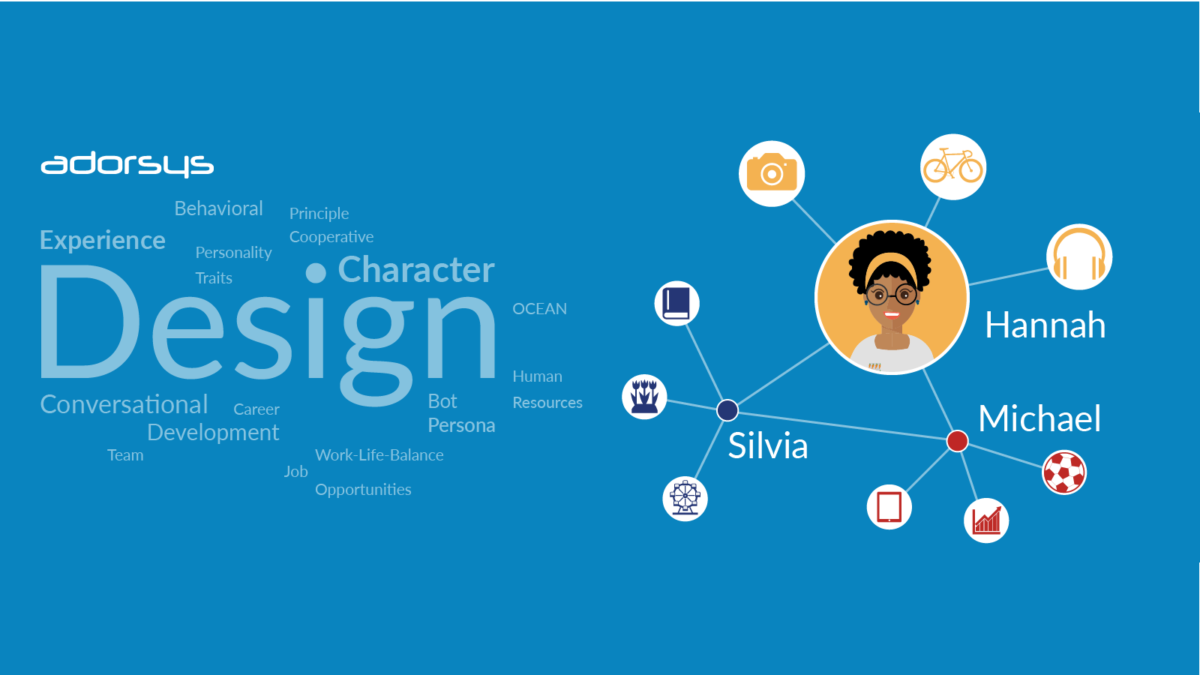 Character Design Part II — The How?

Designing the Character of a Conversational Interface

Having the right tools at hand is indispensable in every creation process. Designing characters for user interaction is a multi-dimensional task, demanding to dig deep into several domains. When designing a bot persona, we need to think about and decide on her personality traits, habits, attitudes, behaviors, the way she talks, and other important aspects. Hence, having the right set of tools and the notion, how to combine them in a unified design workflow, can be a helpful asset.

In this series of articles, we want to present and discuss the tools which are available and are used within the community. We will elicit from which domains these tools emerge, and how we have used them. In the first part of this series, we took a close look at the motivation, rationality and reasoning behind character design for conversational interfaces (https://adorsys.com/blog/character-design-part-i-the-why/). In this part, we turn our focus to the available tools and what we at adorsys learned from designing characters with them.

First, let us take a closer look at our motivation and our objectives. Why have we decided to start this research project?

While evaluating how a chatbot can be employed in our company’s internal communication structure to facilitate knowledge transfer and to make information more accessible, HR approached us. Obviously, a conversational interface can take over lots of little helpful tasks regarding requests from potential job candidates, as well as from existing employees. Though, we consider helping job seekers to find matching job opportunities to be just a minor part in the communication with potential candidates. Presenting adorsys as an interesting employer and an innovative company (employer branding) seems considerably more enticing. Providing thoughtful information about the company, the team, the projects, and the atmosphere in general might help a potential candidate more than traditional job postings. We created personas for three potential groups of candidates: a young talent who just finished her undergraduate studies, an aspiring project manager, and a senior developer. Additionally, departing from our topic clusters, we compiled a persona-centered topic topology to illustrate which facts our archetypal candidates are interested in to help them identify interesting employers or jobs easily.

Shortly after getting started with the conversation design, we quickly realized that a single HR character would have to stretch and adapt by code switching to match the members of our diversified target group. Thus, we have begun to think about using multiple characters to better match our target group ‘job seekers’.

Basically, our assumption is that candidates more easily connect to characters that match their personality — based on aspects like tone of voice, and similarity attraction in the interpersonal circumplex (Nass and Yen, 2010, Chapter 2: Personality). Thereby, concerning our usage scenario, similarity of attitudes, objectives and mindset have the potential to generate empathy. To support this, to some degree, we intentionally applied stereotyping to facilitate identification of one’s matching bot persona. This means, we emphasised the personality prototypes of our characters and extended them with signifiers like cultural background and gender.

Research by Cantor and Mischel (1979) suggests that “the degree of prototypicality of a character with respect to a particular personality type category may indeed influence the ease with which information about that character can be encoded, retrieved and elaborated” (p. 204). Therefore, character consistency can free cognitive resources during interaction (p. 203). Consecutively, having non-aligning or contradicting personality traits and behaviors might lead to cognitive dissonance in the perception of the character, which might negatively influence the mediated experience. Furthermore, during a research project in cooperation with students of the Furtwangen University, the students simulated distinct bot personas for giving expert advice in a banking scenario. Research done by the students indicated, that users preferred addressing a bot persona introduced as an expert for a specific task, instead of dealing with a ‘universal’ bot persona. Also, research by Braun supports this presumption (Braun, 2003).

Additionally, to maximize comprehension and accessibility of content, we decided that voice-first or multi-modal are the best modalities for our conversational HR assistant.

Finally, we were ready to actively kick off the research on the character design. However, some time had passed since we initially created our personas. Thus, we decided to revisit our personas and to make them more concise.

Additionally, as an added bonus, the team members had the chance to familiarise themselves with the personas again.

Having refined our personas, we started with the creation of our bot personas. First, we sat together generating ideas for profiles. We discussed which bandwidth of social and professional attitudes we want to cover with our characters, which spectrum to assign to a single one, and how many characters we need. Ideally, three characters would go along with our personas:

Having decided on a rough sketch and how to position them regarding their social and professional attitudes, we could start the design process.

The Persona Definition Document is the basic profile description of a bot persona. Two of its main components are the biographical sketch and the vocal attributes (Cohen, Giangola, Balogh, 2004, Chapter 6 Creating Persona, by Design). Both these components help to define the language experience with the persona.

The biographical sketch defines factors which influence the language and communication style — like geographical background, education, gender, ethnicity, affinity group, and hobbies. The vocal attributes describe the tone of voice specifically — like ‘calm and mellow’. A third component, the reference image, is specifically helpful when dealing with a multi-modal interface like in our case — where we need a visual representation of the bot persona. This document is helpful for the team members to synchronize and develop a common understanding of the character. Having to agree on a reference image is an important step in this regard. Having to externalize their ideas allows the team members to discuss the different aspects, build a common ground and make sure they are on the same page. A reference image and a name help the team to connect with the character. We did not treat the reference image as a one-to-one representation of the bot persona. Instead, in our case, it only transports the core aspects like clothing style, hair style, and posture. At least, concerning us, we considered those aspects more important than others like age.

Names are always interesting and multi-dimensional. We often connect nameswith specific persons we know, which might influence the attitudes of single team members towards this character significantly. Names often encode gender, and to some degree social and cultural information. We tried picking common names, i.e. which were popular especially in the bot persona’s fictitious year of birth.

The personality spectrum is a tool from brand design. As we have already pointed out, a conversational interface is more or less a representative of your company. Hence, the bot persona should behave and express herself conforming to the brand and to the cooperate identity (CI).

We were introduced to the personality spectrum in an O’Reilly Webinar given by Ben Sauer (2018). With this tool we can determine the personality of a persona by weighting her attitudes according to nine opposing pairs of adjectives. These pairs of adjectives are categories which help to describe values for the brand. Internally, we discussed if we should adapt the categories, or if we should better stay with the ones presented during the webinar. Finally, we decided that it is more effective to use the more generic set of categories to have more and deeper discussions. This, in turn, will result in a more robust understanding of the character, and thus, more complete character design. Even though there are only nine categories, it took quite a while to complete. We discussed the meaning of the categories (e.g. experimental — conventional, small — big, futuristic — nostalgic) for our application and defined our context-specific interpretations.

As this tool records the information only in a very condensed form, it is import to manually record all important aspects which led to this result. It has to be easy to recapitulate the decision making process at any time in the future.

Due to the reference image in our persona definition document, we have laid the foundations for the figurative design of our characters. The image becomes a helpful asset as a type of blueprint. Nevertheless, expressing the essential aspects of a character’s style and her appearance through figurative design is always challenging. Creating a stylized avatar and adding careful details is like storytelling by visual emphases.

Of course, one of the first concerns for interaction with virtual characters is (森先生の不気味の谷). However, our characters are rather schematic, like avatars, so we felt comfortable in this regard.

Needless to say, we went through several iterations to improve our characters. There were several details that drew our attention: hair (style and tint), accessories (watches, bracelets, earrings, fitness bracelets), clothing (match of Hannah’s socks and shirt) and assigned color (Hannah: yellow, Michael: red, Silvia: blue). To support their personality, the bot personas also use a different combination of basic shapes (rectangular, round, triangular). Whereas for Hannah round shapes (glasses, hair band, hair style) are predominant, for Silvia we have the full array of shapes (glasses rectangular, hair style round, blouse triangular). Regarding Michael, triangular shapes are more emphasized (shirt, tie).

After adjusting several details, we felt that the visual appearance of our virtual HR assistants matched their personalities quite well.

At this point, we have a principle understanding of the personalities of our bot personas and we have a visual representation. In the persona definition documents information about the backstory, rough indication considering the communication style, styling, and spare-time interests is recorded. This tool demands that you begin thinking about factors which are important in regard to the language experience of future users. The personality spectrum, on the other hand, defines a basic set of atitudes. The figurative design extends on styling and adds a limited degree of body language (postures). So, now, our character design is evolved enough for geting some feedback from outside of the team and start prototyping.

In the next part of this series, we dig deeper into character design tools. OCEAN, the bot persona toolkit, and conversation design tools are still on our list of helpful tools to explore.

This series of articles in based on research the Conversational User Interface (CUI) team at adorsys has performed over the last couple of years (since late 2016). Alina Megos explored the multi-modal multi-character conversational interface mentioned in this article in the thesis leading to her bachelor’s degree. CUI Characterful HR Assistants, you can find the thesis (written in German) and related materials.

The characters in the images as well as the screen design are part of the research Alina Megos performed for her bachelor’s thesis (see note above). They were created and refined by her in the course of her thesis (see at CUI Characterful HR Assistants).