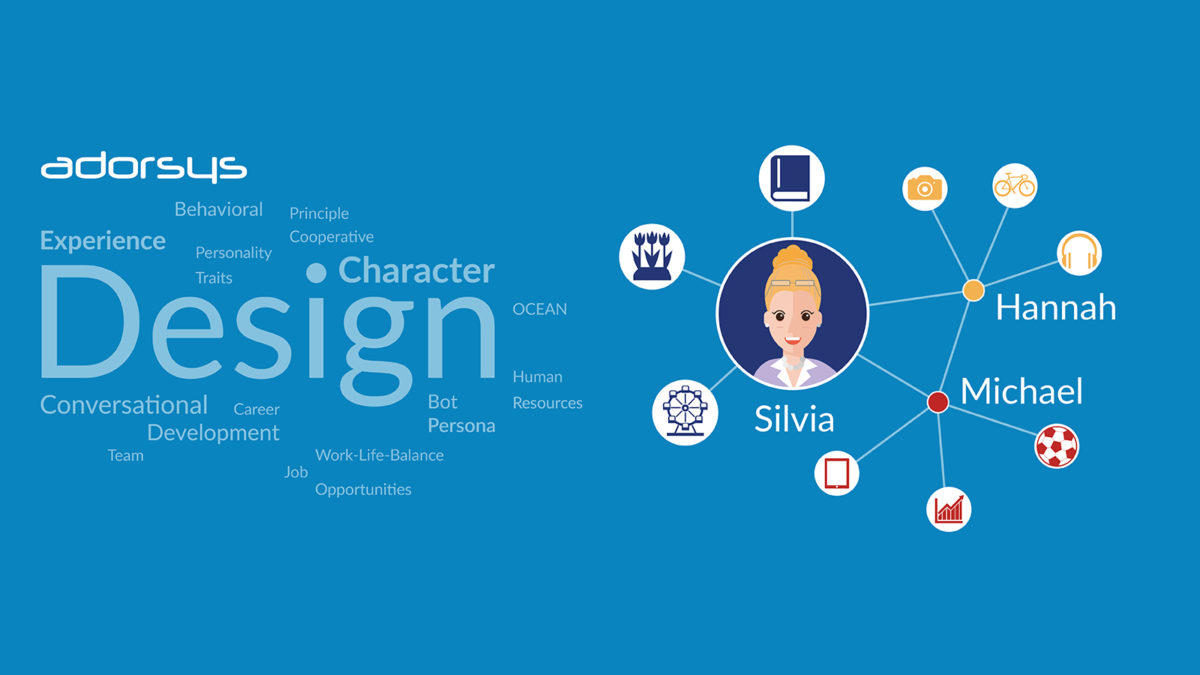 Character Design Part I — The Why?

Designing the Character of a Conversational Interface

A conversational interface becomes a digital representative of the company. As with every representative, her character and her behavior ideally go along with the company’s corporate design (CD), corporate behavior (CB), and corporate identity (CI). Additionally, matching the expectations and the communication style of the members of the target group is a desirable quality of the character. Hence, character design for conversational interfaces is not only a nice feature, it should be considered mandatory. Notwithstanding its importance and its impact, it seems that a methodology how to design characters is not readily available.

In this series of articles, we want to present and discuss the tools which are available and used in the community, from which domains these tools emerge, and how we use them. Furthermore, we want to discuss how these tools can be combined to form a framework. Maybe, this will be a starting point for discussions which lead to the definition of a methodology.

When we refer to the character of a conversational interface, we also use the term bot persona.

Why Character Design Is Important

In short: We can either design the character and personality of the bot persona explicitly or leave it to the users to infer it implicitly. As with all design – good design is intentional.

Research by Clifford Nass et al. (Reeves and Nass (1996), Nass and Brave (2007), Nass and Yen (2010)) show that in interactions humans have a tendency to treat computational devices as social counterparts. Through multiple setups, the researchers explored how humans apply social rules and expect socially correct behavior from their computational vis-a-vis. The results emphasize the importance of carefully drafting and designing the bot personas. Most of us have experienced themselves how we apply social rules when dealing with computational devices, especially with voice technology. For example, when on the phone with a person unknown to us, we at least make assumptions about their character and personality, or we even go as far as imagining them. Often, when testing the usability of our conversational scenarios with our prototyping tool, we found that the testers instinctively stick to social rules – greetings, saying thank you, etc. Being able to address the conversational application by name has always been considered natural by the majority of our testers, and thus important.

At adorsys, we set up a research project to investigate character design for conversational interfaces. Designing the conversations and interactions of our HR chatbot prototype, we felt that a single bot persona could only provide a limited experience to the members of our diversified target group (e.g. young professionals, senior developers, business analysts, etc.). Having a couple of different characters might simplify the communication with the subcategories of our target group ‘job seekers’. Maybe, a part of the question is, what is more approachable, convenient and convincing — code switching performed by a single character or choosing an interlocutor from an HR team with stereotyped characters? Conveying our company’s culture of inclusion could be another motivation for a multi-character design, e.g. representing genders and cultural backgrounds. Awareness that character design might be a good channel to also transport these categories only came about during the project, and hence, they are not expressed in the current design. Therefore, we decided to explore character design for multi-modal multi-character conversational interfaces (e.g. for voice-first devices like Echo Show and Google/Nest Home Hub).

These were by far not our first steps in character design. However, this time the objective also encompassed laying out and documenting a character design workflow. Of course, to achieve that, we iteratively had to change our perspective — cyclically stepping back and reconsidering the bigger picture. From my experiences in storytelling and media content creation, I am used to evaluating and refining characters and their back-stories based on psychological personality types (e.g. as described by Fritz Riemann (1991)). However, for designing a bot persona from the ground up, I think this method is not the easiest starting point.

Therefore, developing our project on character design, we turned to publications in game design. We targeted voice-first, thus, we considered the visual representation of our characters to be important. Just like Katherine Isbister (Isbister 2006, Preface, p. xix) noticed over a decade ago, also we had the feeling that in game design, there is a strong focus on linear-media design principles. Additionally, most of the materials we viewed have a strong focus on figurative design (e.g. stature, postures). These aspects are important. However, for conversational interfaces (and as Katherine Isbister states, for the design of characters for interactive media) there are other equally important design considerations:

So, we decided to apply and evaluate the tools from psychology (like OCEAN) and those mentioned by different members of the community. This is what we will take a look at and go into more depth in the next the next two parts of this series (Second Part: https://adorsys.com/blog/character-design-part-ii-the-how/).

This series of articles in based on research the Conversational User Interface (CUI) team at adorsys has performed over the last couple of years (since late 2016). Alina Megos explored the multi-modal multi-character conversational interface mentioned in this article in the thesis leading to her bachelor’s degree. CUI Characterful HR Assistants, you can find the thesis (written in German) and related materials.

The characters in the images as well as the screen design are part of the research Alina Megos performed for her bachelor’s thesis (see note above). They were created and refined by her in the course of her thesis (see at CUI Characterful HR Assistants).